This unusual kitchen was completed last year; the third such project that we have worked on with this client. Here's what she said :

'In the last eighteen years Chris Eckersley has designed three kitchens for me.
The first was when I lived in a traditional 200 year old Hampshire cottage, where the kitchen comprised the narrow, low passage running the length of the back of the cottage. He transformed it into a light, functional kitchen which blended with the essential character of the cottage through the use of light natural wood and carefully designed furniture, making the best of the limited space while breaking up the ‘corridor’ feel.
The second was for a relatively stark high ceilinged 1906 Devon farmhouse. His design here perfectly reflected the clean lines of the building through simplicity and the use of plain paintwork and granite. 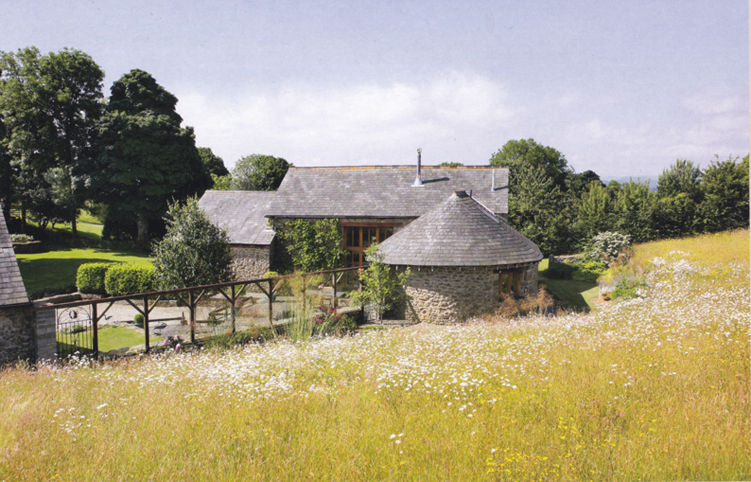 More recently I presented Chris with the ultimate challenge of designing a kitchen for a Devon roundhouse attached to a converted barn. He produced a stunning design which emphasised the curved walls while his colleagues skilfully mastered the challenge of producing curved cabinets and work tops, off site, to deliver his design – which has been praised for its ‘wow factor’, and also for its tranquillity.'

This job was an interesting one for us as it was obvious from the outset that the only way of dealing with a round room was to make curved cabinets. On surveying the building Chris found that it was not a perfect circle, and so we had to establish a nominal 'centre' and work from that. Robin Page made the curved panels for us by laminating thin layers of birch ply in a bag-press; he also made the wonderful curved wooden work-surface by laboriously bending thin strips of oak around a former. We made the oak extending table, bought in the chairs from Lloyd Loom of Spalding, and made a copy of a Provencale sideboard seen by the client in a magazine. A local builder, Vaughan Smith, did the stripping out and removed a low ceiling beam (which was not supporting anything) and took up the slate floor, while Chris and the client went to Mandarin Stone in Monmouth and selected the limestone for the new floor. Alan spent two weeks on site with his assistant Stephen and supervised the cabinet installation. The honed granite worksurfaces were supplied and expertly fitted by SCI Masonry of Newton Abbot, and the three paint colours used were chosen by the client from the 'English Heritage' range by Little Greene Ltd.

Alan Minchin : 'Because this was an old building - and it was circular - it looked like this could be a tricky one to install. But I realised that - of course - we had to stick to the radius of the curve that Chris had determined. So before we went on site I made two large wooden templates to the inner radius of the curve. When we got to site we just placed these on the floor going right around the kitchen. This gave us a line to work to, and the cabinets just fell in behind the line.'

Here are some 'before and after' photos which record the original kitchen, the stripping out, and the re-fit :

A final word from the client :
'Thank you so much for all your efforts in transforming this space. I think it is a great credit to you all that the end product meets, and indeed exceeds, expectations. It has been a challenging and nerve racking experience for me personally and yet I have felt fully supported by Chris in particular, and Alan on site, on dealing with all the issues that have arisen, both foreseen and unforeseen.

I think it is a credit to Chris's design skills and accuracy, to the whole team's craftsmanship, and to Alan and Stephen's approach on site, that the end game went so smoothly. The way the cabinets slotted into place on the morning of their arrival was nothing short of a miracle for me!'